In sealing systems for valves where soft packing materials are used, the initial compression on the packing decreases as a function of time and load. The causes for this are in most cases:  Setting phenomena during operation  Reduction in sealing material volume as a result of wear  Ageing of the sealing material  Influences from equipment operation, like pressure and temperature changes  Faulty assembly Elasticity through spring-loaded elements Since the sealing materials do not have enough self-elasticity for compensation of volume losses, additional elastic elements in the form of spring discs are inserted for minimization of the loss of volume and compression so that inadmissible leakage rates are prevented. The loss in sealing material volume caused by setting, material discharge through wear and ageing will be compensated by follow-up pressing of counter-sealing faces through spring packs so that the actually existing sealing pressure is always higher than the sealing pressure required as minimum. The spring colums are selected for the admissible drop of force across a specified spring path. Limit values for leakage Sealing systems with spring energising packs serve to ensure long-term tightness of sealing joints. The leakage limit values have been verified under test conditions. The following leak rates are admissible according to the German codes and standard TA-Luft. In our opinion a TA-Luft certified packing for a valve is not sufficient as volume loss through wear will still occur and therefore leakage after while. Only when sufficient compression on the packing througout its life is available , the system can be called a TA-Luft system. The continious compression will be guaranteed by the addtional spring compression by our spring energised spring colums and can be substantiated by a calculation. [cc_downloads id=2386] 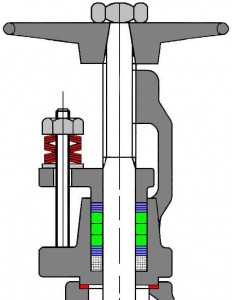 Camprofile gaskets can be supplied in all variations and up to a maximum diameter of 6,000 mm. The latest model is a third generation model which incorporates the latest camprofile and is available in models which can be used for more than one pressure Group. Result: better sealing and a reduction of stock size. [cc_downloads id=2532] 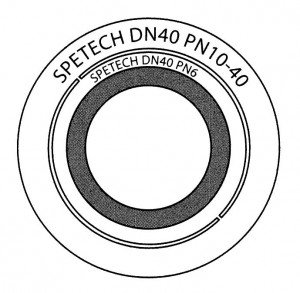 Spiral wound gaskets consist of a metal fame with a spiral wound sealing material. All possible material combinations can be supplied up to a diameter of 4,000 mm.

The secondary frictional connection dissipates the applied force in case a defined value is exceeded so that the force flows past the seal and through its support. As a result of this, the sealmaterial itself is compressed with a defined force and the applied force exceeding the sealing force is exclusively used as joining force of mthe etallic components. The advantages are many: narrow sealing faces for obtaining a high surface pressure, protection against excessive compression, safety against blow-out, minimalisation of setting phenomena and exclusion of abrasive wear caused by fluid flow. A safe sealing connection must be based on thorough design of seal, bolts, the use of suitable materials and a proper assembly. The KNS sealing system has been designed by means of the computer program WT-Expert. The torque for tightening and the arrangement of springdiscs are among those values from the great number of output data that are relevant for the user and the perfect sealing of the system. The calculation is in accordance with TA-Luft, EN1591 and AD2000. Spring-loaded sealing systems in round, square or even RTJ type flange connections require compression by springs with a working range in both directions. Thus stresses which occur during start-up and shut-down can be compensated. Flanged connections with long bolts subjected to heavy temperature variations are most susceptible to leaks. Spring-loaded sealing systems in cover joints like manhole covers or air-coolers are subjected to internal pressure and are preferentially used to maintain the minimum sealing pressure during start-up and shut-down processes at a low internal pressure (surface pressure of seal usually < 25 N/mm²). Since the seals are commonly rather high, several spring discs are needed for the long travel distance. When the internal pressure reaches a defined value, the spring force as sealing force will now be substituted by the pressure load of the cover.

Ring Joint gaskets are metallic solid seals for high pressure and temperature applications and are fitted in special ring groove type flanges. A wide range of types and materials is available, both standard and exotic and non-standard dimensions. Of course they can be supplied with EN10204 certification. Flange calculations for RTJ ringjoint sealsystems can be supplied according to the standards of EN1591-1 or AD 2000 Merkblatt. The standard calculation methods have been slightly altered, to realise a realistic and better result. The calculation shows the thightness of the sealsystem and show which materials are neccessary for a perfectly working sealsystem. A complete set of documentation can be suppied to the notifying body for approval.

Lens gaskets took their name from their form. Thanks to the spherical contact area of the gasket with the conical flange arrangement a high local stress is accumulated and very good tightness is achieved. 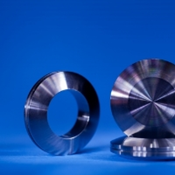 Weld ring gaskets are used in applications where it is absolutely essential to have a leak proof sealing system and also where a limited opportunity for disassembling is required. Available in all standard and many exotinc materials and up to a diameter of 6,000 mm Ø.

Gasket sheets are state of the art sheets for technical sealing of various media and for a broad range in temperatures and media. Each sheet has a unique number for tracability. [cc_downloads id=2551]

Soft flat gaskets can be cut by knife, water or laser from the sheets and are the most commonly used seals for sealing flange connections. All forms can be supplied.